Fresh infections drop below 700 in TN 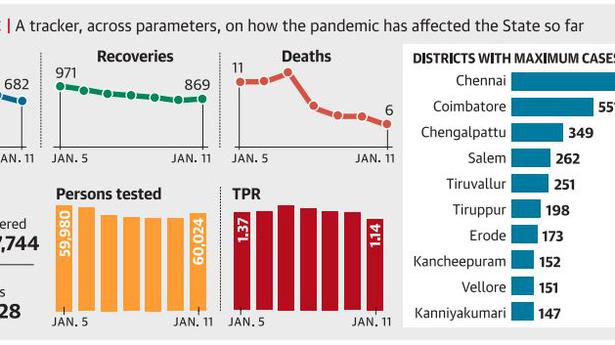 Three days after Tamil Nadu recorded fewer than 800 new cases of COVID-19, the state’s daily number of infections fell below 700 on Monday.

A total of 682 people have tested positive for the infection, bringing the total to 826,943. No less than 869 people have been released after the treatment, bringing the total number released to date. at 8 07 744. With six other people succumbing to the infection, the state toll stood at 12,228. No less than 6,971 people are currently in treatment.

There were 44 cases in Chengalpattu, 34 in Salem and 30 in Tiruvallur.

While Perambalur recorded no new cases, the remaining districts reported less than 30 infections each. Among them, 20 districts registered new single-digit cases.

The six people whose deaths were reported on Monday had co-morbidities. Five of them were over 60 years old.

Three of them died in Chennai, while Thanjavur, Tiruvallur and Virudhunagar recorded one death each.

A 57-year-old man with diabetes was admitted to a private hospital in Madurai on January 3 with complaints of fever for seven days and breathing difficulties for two days. He died on January 10 of COVID-19 pneumonia.

Another private lab – Accurex Diagnostics, Madurai – has been approved for COVID-19 testing. With this, there are a total of 249 testing facilities in Tamil Nadu, of which 68 are in the public sector and 181 are in the private sector.

Renovation of the station to be completed in December