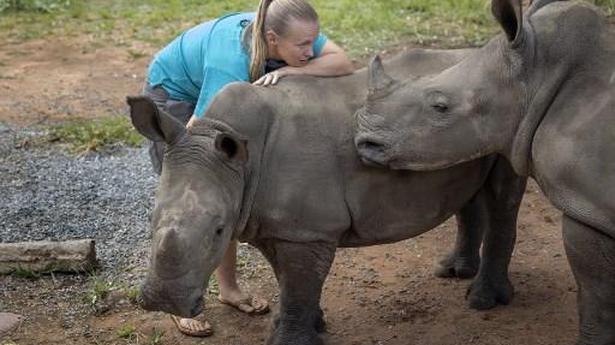 The rhino calf “Jessie” was only four months old when she arrived at a shelter in northern South Africa, bleeding from a cut to her shoulder and deeply traumatized. Rescuers suspect the animal was injured by poachers who took out its mother, hitting the calf with a machete to drive it away.

Jessie was fortunate enough to escape alive and land at a unique center dedicated to the rehabilitation of rhino orphans. “It took her two days to give her Valium to calm down,” remembers caregiver Zanre Van Jaarsveld. “She was also very dehydrated.

The Rhino Orphanage is nestled in the lush forests of South Africa’s Limpopo province, hidden at the end of a red dirt road strewn with potholes.

Mischievous monkeys cross the road as a giraffe tower gallops elegantly into the distance.

A large metal gate guards the entrance to the center – surrounded by several dozen game reserves in an undisclosed location. “If farm workers give poachers information … they’ll make more money than they get in a year’s pay,” said founder Arrie Van Deventer. Safety and vigilance are therefore essential to protect the orphanage, which survives thanks to private donations.

‘We are their mothers’

Van Deventer, a former history professor turned game rancher, kicked off the project after being called in to help with a poaching incident in 2011.

Two female white rhinos were found dead in the area, probably killed for their horns. One of their two calves was still alive and needed a new home. Van Deventer, 67, made several unsuccessful requests.

The only options for the traumatized calf, he said, were tourist facilities where it would be harassed by visitors. “I discovered that there was nothing, nowhere ethics,” recalls Van Deventer. “Then I heard myself say on the phone: I’m going to build one.”

Today the orphanage is home to a number of rhino calves. Most are square-lipped species, also known as white rhinos, but some of the rarer critically endangered black rhinos are also housed there.

“If they get too used to people, it is more difficult to release them into the wild,” Van Deventer said, adding that the grounds were also closed to the public for “security reasons”.

Four staff members and two volunteers, all women, work around the clock tending to rhinos, sometimes even sleeping next to the youngest calves in an open barn. “We are their mothers,” said manager Yolande Van Der Merwe, 38. “They sleep very close to be warm and comfortable. Someone (us) bring food, or if we want to have dinner or a toilet break, someone comes to stay with them, ”she said. AFP. “As soon as they are left alone, they start screaming. Their cries are high-pitched, something like the sound of a dolphin, according to Van Deventer.

Most of the calves have been orphaned by poachers. Rhinoceros are killed for their horns, which are highly prized in Asia for traditional and medicinal purposes. A kilogram of keratin, obtained from their horns, can sell for more than $ 110,000 (90,000 euros) on the black market.

The trade is lucrative and thousands of rhinos have been poached in South Africa over the past decade.

At the orphanage, the three youngest residents – two women and a man – eagerly await large bottles bursting with a mixture of milk and boiled rice.

Rhinos gain over 350 kilograms in their first year of life, and calves must feed every few hours.

“At five or seven days old, they’re tiny, up to their knees,” waved Van Der Merwe. “They gain at least a kilo a day.”

Calves remain in the orphanage until they are five years old, when they are deemed strong enough to defend themselves from predators. They are then released to a nearby wildlife reserve where an conservationist keeps the orphanage informed of their progress.